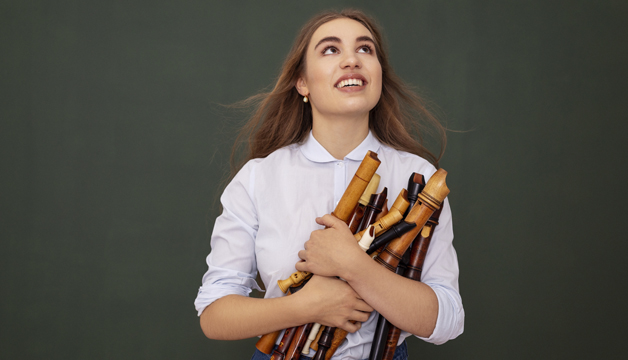 The Musikfest Bremen once again invites you to a »musical country outing« in the Cloppenburg Museum Village. Spread over an area of around 15 hectares, against the backdrop of a park-like landscape, framed by tall trees and picturesque streams, it is home to more than fifty rural buildings from the 16th century to the beginning of the 20th century. Transported here and rebuilt true to the original, they offer a vivid insight into the everyday life and cultural history of the entire north-west. The festival has selected four venues on the site for its series of concerts: the Quatmann estate from Elsten, built in 1803−1806, the Arkenstede manor house from Groß-Arkenstede, built in 1684, the village church from Klein Escherde, built in 1699, and the Hoffmann estate from Goldenstedt, built in 1835/40. Four concerts of 45 minutes each will take place simultaneously at 6 p.m. and 8 p.m. Make your own itinerary of two consecutive concerts of your choice. There is enough time between the concerts to get to the next venue - and for more impressions of the museum village grounds!

For more than 20 years, David Orlowsky and his eponymous trio were internationally acclaimed klezmer stars. In search of new challenges, the clarinetist found his musical counterpart in David Bergmüller. In the village church, the duo present their unique, genre-defying combination of lute and clarinet. Whether music by Henry Purcell, John Dowland & Co. or original compositions with elements of minimalist music and improvisation, here old and new flow together in an exciting and thrilling way.

She may be just 23 years old, but Lucie Horsch has already played her way into the international limelight at breakneck speed. BBC Music Magazine describes her recorder playing, an instrument sometimes prematurely dismissed as frivolous, as having »fearless virtuosity and superb technique«. With her ensemble Fuse, she spans the spectrum from Béla Bartók and Igor Stravinsky to Charlie Parker, Astor Piazzolla and traditional music at Hof Quatmann – no one can doubt the qualities and versatility of this instrument anymore!

Born in Toulouse in 1994 to Spanish parents, Thibaut Garcia has already established himself as one of the most talented guitarists of his generation in the world, with his ingenious playing, fast guitar runs and varied repertoire. With a focus on deeply athmospheric Spanish and Latin American compositions reminiscent of his roots, he will enthrall the audience at the Herrenhaus Arkenstede by revealing the beauty of the guitar in all its facets.

In Hof Hofmann, the ensemble La Pifarescha presents a panorama of Renaissance musical life with shawms, trumpets, trombones, flutes and bagpipes as well as other wind and percussion instruments. The musical display ranges from the dramatic roar of battle music to the spirituality of religious fervor to folk dances full of joie de vivre - an enjoyable and improvisational journey through the crossroads between war and peace mixed with European, Arabic and Asian influences.

in cooperation with Landkreis Cloppenburg