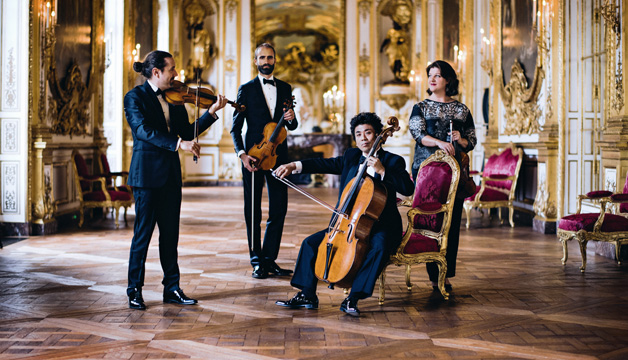 The Musikfest Bremen invites you to a »musical country outing« in the museum village of Cloppenburg. Spread over around 15 hectares of parkland, framed by tall trees and picturesque streams, more than fifty rural monuments from the 16th century to the beginning of the 20th century await you.
The buildings were transported and painstakingly reconstructed here, offering a vivid insight into the history of daily life and culture of the entire north-west of Germany. The festival has chosen four venues on the site for its concerts: The Hofanlage Quatmann from Elsten built between 1803 and 1806, the Herrenhaus Arkenstede, a manor house from Groß-Arkenstede built in 1684, the Dorfkirche (village church) from Klein Escherde built in 1699 and the Hof Hoffmann from Goldenstedt built in 1835/40. Four concerts of 45 minutes each will take place here at 6 p.m. and 8 p.m. You can choose your own trajectory by picking two consecutive concerts. There will be enough time between performances to get to the next venue – and explore the Museum village along the way!

HOFANLAGE QUATMANN
Bjarte Eike & Barokksolistene
»The Nordic Sessions«: A travel through scandinavian folk music from the 18th century to the present day

In the Hofanlage Quatmann, the violinist Bjarte Eike and his Barokksolistene will introduce the audience to popular Scandinavian music, from the 18th century to contemporary folk. Following the success of their "Alehouse Sessions", they play both old and new music and uncover the connections between traditional orally transmitted folk music and art music. With music and anecdotes from Norway, Denmark and Sweden, they combine historically informed performance practice with the timeless joy of playing music, throwing conventions out of the window.

In Hof Hoffmann, the young Lithuanian accordion virtuoso Martynas Levickis pushes the boundaries of his instrument. While the fingers of his left hand playfully dance back and forth between 120 manual buttons, his right hand flies over a three-octave keyboard. Deliberately crossing the boundaries between genres, he is a master at building bridges between styles and epochs and spans an arc from Mozart to Chopin and Bizet all the way to folk songs from his homeland and Astor Piazzolla.

The young English singer Alexander Chance, who is rapidly establishing himself as one of the foremost countertenors of his generation, introduces himself in the Dorfkirche (village church). Accompanied by the lutenist Toby Carr, his clear, angelic voice lays bare the wide range of emotions expressed in Elizabethan lute songs. Music and Poetry come together in works by composers from John Dowland to Henry Purcell, allowing performers creative freedom to play with language and harmonies.

The Parisian quartet Quatuor Cambini, named after Mozart's contemporary, the violinist and composer Giuseppe Maria Cambini, welcomes you to the Herrenhaus Arkenstede. They are members of France’s leading early music ensembles and specialists in historical performance practice. Bringing out high intensity and finely tuned nuances in the music, the fragility of the mind is laid bare as they play string quartets by Haydn, Mozart and Gounod with authenticity and passion.

in cooperation with Landkreis Cloppenburg