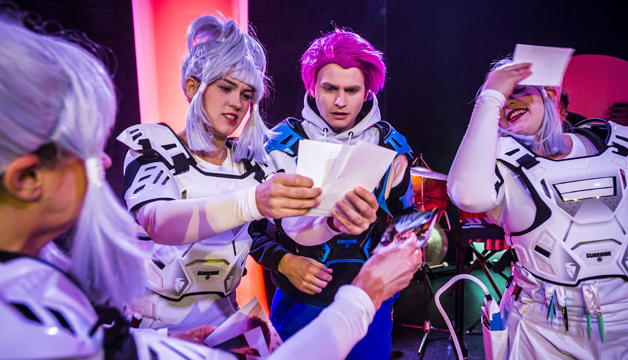 »Grand opera for little people« has been the motto of the Taschenoper Lübeck since 2005, proving how children and adolescents can be inspired by music theatre. After 14 years of cooperation with the Stadttheater, the Taschenoper inaugurated its own domicile in the centre of Lübeck's old town island in October 2021 with „Das Magische Game – Eine Zauberflöte“ ("The Magical Game - A Magic Flute")! A mysterious and complex work, Wolfgang Amadeus Mozart's »Magic Flute« is both fairy tale and profound, combining the comic with the dramatic. In order to bring this story closer to a young audience, it has been dusted off and catapulted into the here and now. Tamino is just a normal kid hanging out with his friends. In a music class, he loses himself completely in the role of a video game hero. He fights against dangerous monsters and passes tests, but despite that everything suddenly gets out of hand... The result is, according to the review of the premiere in the Lübecker Nachrichten, "highly enjoyable, very imaginative, refreshingly cheeky" - Magic Flute reloaded!